There are two bodies, up here on stage. One is of cool flesh, lavender-scented. Sleek, dark hair, parted perfectly in the centre, is pulled back into a chignon, revealing the white arc of throat, the shadow formed by the sweep of her jawline as she bends her head in concentration. Black silk accentuates the pale sheen of her skin, her dress cut wide against the shoulders to reveal her collarbones, and the stretch of her swan-like throat. Slender hips cradle a spine which draws itself, erect as a candle-flame, towards the ceiling. She has arms of alabaster, impossibly long, arms of a conjuress.  Her eyes are closed, her nostrils open. She breathes music into her, as if it were all she needed to exist. All senses are focused on this other body, gripped between her thighs; this body of violent swells and curves so different to her own.

I am smooth and gleaming, the light from the chandelier creating honeyed ripples on the surface of my flesh, flesh of maple.  I am shaped to hold secrets. I am hollow, yet fecund.  Bodies such as mine are made for the fervent embrace.  Flesh such as mine will not erode

easily, even from the rituals of the most devout of lovers.

With the first coaxing stroke of her bow, I am summoned from my silence.  My senses are so exquisitely honed that a flutter of fingers at my throat forges fire in my womb. I feel the strength of the thighs which clasp my hips, the tender determination of her hands upon my spine.

I cannot but yield up my music.

Is this how I was born into consciousness, the bow keening across the sinews of my strings, animating them with music? My cords, through which I sing and speak, and feel. She calls me Seraphine, her burning one, her angel. No matter where we are in the world, I feel as if I am always here; caught in light, cradled in her arms, pivoting on a single point of pain like a ballerina, poised between grace and chaos.

She makes love to me each night on stage, each performance a fresh seduction.  Together, we weave sound and silence into incantations which bewitch and benumb those who listen.

Those who come to sit in the dark and watch are nearly always men, no matter if we play in the theatres of Paris, New York or Cairo.  It is when the lights are directed away from them, when lulled into the roles of mere observers, that the truth of their lives is revealed in their faces, all yearnings and disillusions.  Men with hungering eyes and lonely mouths.  Men with laden wallets and leaden hearts.  There, in the embrace of the illuminating dark, they become my performance.

I am of wood, yet something of me is woman. 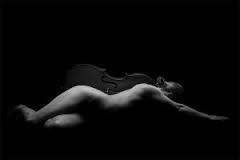 Bow poised like a wand, my mistress weaves her spell of enchantment upon the audience, to which I am her necessary accomplice. Her hands describe luminous hieroglyphics in the air, predict miracles upon my strings; her fingers unstitch and extract the very essence of the composition.

I love my mistress.  But she has a heart made of wood.  She does not respond to the caresses of love.  It is only music that makes her soft, Bach that brings fire to her cheeks, Schumann that coaxes a languorous curve from her lips. Only for Brahms does her body quiver, her sex yielding to the vibrations of the notes through my body, becoming moist with desire. But for what? Strangely, it is I who long for the touch of a man, I who am fashioned from the finest of maple wood.  Perhaps, one night, whilst playing me in a frenzy of passion, she transferred her heart to me.

There are stories woven into the sinews of my strings. My mistress slices her bow along them like a scalpel. Effortlessly, she extracts them, impales them, gleaming yet intangible on her bow-tip. With theatrical flair, she tosses them carelessly into the eager laps of the men in the audience as she plays.

But there are stories and there are secrets. The secrets I keep deep in the hollow of my body. These she shall not have.

I love my mistress.  But equally, I love desire itself, the sensual energy that dances between two beings.  And if I cannot be completely fulfilled myself, then to invoke desire in others is what I will do.

This story was seeded in my psyche sixteen years ago, when I had an incredibly erotic dream where I was a cello, being played to an audience of only men, in tuxedoes. I could feel the music pouring out of me as if they were physical sensations, my whole body was full of this incredible cello music, and I woke up in the middle of some intense krias (a Tantric word, describing the movement or release of orgasmic energy through the body). I had woken up my boyfriend with my sounds and writhing, and I could still hear the music in my head, as I described the dream to him. Over the next few days, I wrote about 3 pages of what the dream had evoked for me. It was the beginning of my first erotica story – but I couldn’t seem to finish it. Until a few days ago.

Around the writing of a story, are often other stories.

Enjoyed this Excerpt of free fiction? Leave a comment! It creates wonderful karma – and is good blogging etiquette .